by Fran Golden, Special for USA TODAY | Published on November 20, 2015 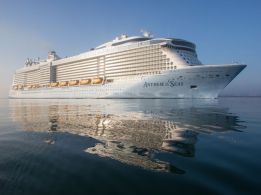 Royal Caribbean’s thoroughly modern, 4,200-passenger Anthem of the Seas is now officially cruising from its new homeport of Bayonne, N.J., after a summer cruising from the UK. The state-of-the-art, $1 billion “smart ship” is a knockout from stern to bow.

The line made some very minor tweaks in moving the six-month-old ship from a British-focused audience to the New York market – no more teakettles in the staterooms, for instance. But the ship’s robot bartenders and such experiences as simulated skydiving deserve wows on both sides of the Atlantic.

Here are our favorite things to do on Anthem of the Seas. 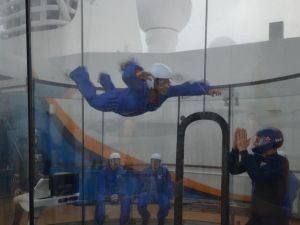 Try indoor skydiving: If you’ve always wanted to fly but have been afraid to jump out of a plane, RipCord by IFLY is your chance to experience the wind-in-your-face exhilaration on a cruise ship. You put on a flak suit and get in a clear, vertical wind tunnel where your cheeks wobble as you follow your instructor’s directions and float in the air. For those who demure, there’s nearby stadium seating where you can watch the skydivers — as well as other brave passengers attempting to stand on surfboards at the FlowRider wave pool. 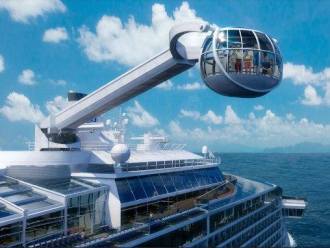 Go high on the North Star ride: They couldn’t quite fit a Ferris wheel, but Royal Caribbean simulates the at-the-top experience with this big, glass capsule, which holds 12 and gets lifted by a giant mechanical arm high above the pool deck and sea. Get your camera ready for photos that will amaze your friends. 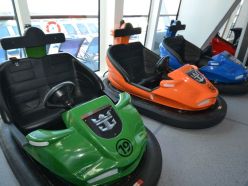 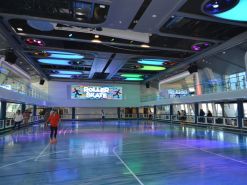 Smash on bumper cars/go roller-skating: The SeaPlex is one of the most amazing spaces we’ve encountered at sea, an indoor sports center with a rink where at alternative times you can smash into fellow passengers on bumper cars, play basketball or volleyball and go roller-skating to tunes played by a DJ in a floating booth. There’s also opportunity to climb a very tall ladder for a real flying trapeze experience (with substantial padding on the ground assuring a bouncy landing). Bonus: There’s a stand where you can get a complimentary hot dog with the works.

Order drinks from robot bartenders: Have B1-O or N1-C fix you a drink. They staff the Bionic Bar, and while they aren’t the best bartenders in the world (no creative mixology here) they do happen to be robots. You order your drink on a tablet, and your vodka tonic or fruity rum drink gets delivered in a plastic cup via a conveyor belt. These headless, mechanical arms aren’t particularly good at listening to your woes, but they do occasionally dance, eliciting squeals of delight from onlookers.

Headbang at the Music Hall: Pretend you’re seeing the real thing as you scream along with first-rate tribute bands — Bon Jovi, Journey, Led Zeppelin – and classic rock cover bands, such as the excellent Vegas act Phoenix, in this two-deck live music venue. The scene is loud and energetic and even a tad sexy, thanks to the sultry red decor. The huge dance floor assures a lively party scene.

Rock out at We Will Rock You: The songs of the legendary rock group Queen, and a storyline that has to do with a future age where rock music is banned, form the basis for this award-winning West End show. Warning: After seeing the full-length production you’ll spend the rest of your cruise with tunes such as Crazy Little Thing Called Love and Bohemian Rhapsody stuck in your head.

Do bites and beer at Michael’s Genuine: Some of the best eats we had on the ship were the for-a-fee nibbles at this gastrobpub, created by James Beard Award-winning chef Michael Schwartz. Try the polenta fries and the chicken liver crostini ($4 each). The accompanying craft beer menu includes British beers from such brewers as Brewdog and Brooklyn Lager and Michael’s Genuine Home Brewon draught.

See Spectra’s Cabaret: This avant-garde show will dazzle those who like a great spectacle. Aerialists, singers and dancers interact with digital screens – both wraparound and controlled by robotic arms. It’s a visual stunner.

Surf the net: Royal Caribbean has made much of its VOOM Internet – with speeds that match broadband on shore. On our preview cruise (with fewer passengers onboard than usual) it worked great – you could send and stream video without watching your laptop spin.

Get interactive with the artwork: The ship’s 3,000-piece contemporary art collection is anything but staid. There are works with light and videos and that move, and there are pieces you can touch – such as Rafael Lozano Hemmer’s smart pad-operated Pulse Spiral, which reflects your heartbeat in twinkling lights.